You are in: Home > News > STEEPLECHASER CABRAL TO MAKE SURPRISE MARATHON DEBUT IN HONOLULU ON SUNDAY

HONOLULU (07-Dec) — Through the mud and over the hills, Donn Cabral pressed forward along the trail at Reservoir #6 in West Hartford, Conn. The Olympic steeplechaser was in the middle of a workout that consisted of 22 miles with 18-19 of them at 5:20 pace, a monumental training session for a marathon runner. While most track athletes wouldn’t even think of attempting such a challenging run, Cabral felt like he was home.

“It just felt great. I wasn’t able to get into a rhythm because of the course, but I just knew that I was so strong and my body was working the way it was supposed to. This is the way running is supposed to feel,” Cabral told Race Results Weekly over the phone on Thursday.

He went on to complete the early November workout with 19 miles run at 5:15 pace which, if maintained for 26.2 miles, would equate to a 2:17 marathon. The workout is one of many that have given Cabral confidence heading into his surprising marathon debut at the Honolulu Marathon here on Sunday.

At this point in the 28-year-old’s career, he has accomplished a great deal in the steeplechase: two eighth-place finishes at the 2012 and 2016 Olympic Games, two NCAA titles, and a 10th-place finish at the 2015 IAAF World Championships. While Cabral still feels that he has unfinished business in his primary event, the decision to run a marathon now came as a result of listening to his body and the training that he responds to.

“A big reason that I wanted to run a marathon was that I think it’s the best way for me to run my best steeplechase,” Cabral said. “I look back at my training in 2015, the year that I ran my 8:13 personal best, and I think it was a week before the USA prelims, I did a hard 10-mile run at 5:15 pace in really humid weather and I ran 90 miles two weeks before. Nothing about that is crazy, it just shows that I do run well with that type of work.”

After his last track race of 2018 –-the USATF Outdoor Championships where he placed 12th overall in the steeplechase–- Cabral wasn’t content with the finish and decided to jump into marathon training soon after. Working with his high school coach Peter Oviatt and Hoka One One NJ-NY Track Club’s Frank Gagliano, Cabral has struck a balance between his master’s program at the University of Connecticut and training that includes 90-105 mile weeks.

“I run well when I’m training for the long-distance races and there’s a lot of strength training involved,” he said. “I’m a big believer in marathon training’s effect on me personally so I thought this was the perfect time to experiment and see how it goes.”

During his marathon build-up, Cabral won the Great Cow Harbor 10-K and ran a personal best of 1:05:37 when he claimed the Eversource Hartford Half-Marathon title in October. For Honolulu, his goal is to run in the 2:18 range.

“I would say on a flat, typical marathon course, I think I’m in shape to be running under 2:15 right now,” Cabral said. While factoring in humidity and winds in Honolulu he predicted a 3-3.5 minute conversion. “That would put me at about 2:18, somewhere around there, but I want to make sure that I leave my first marathon with a good taste in my mouth. I want to come back and run another one at some point.”

While Cabral’s long term goals remain with the steeplechase –-he hopes to make Team USA for the 2020 Olympic Games in Tokyo-– racing the marathon highlights a form of training that Cabral found works best for him.

“This is what gives me confidence,” he said. 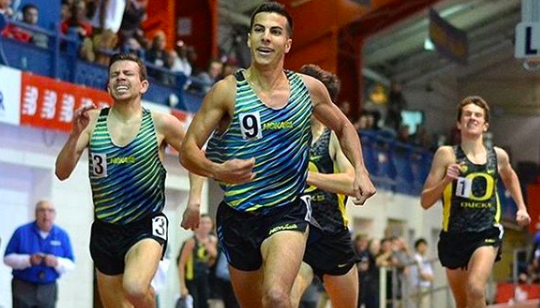