You are in: Home > News > EKIRU COMES CLOSE TO HONOLULU MARATHON RECORD

HONOLULU (09-Dec) — Despite running alone for the final third of the race and battling powerful trade winds, Kenya’s Titus Ekiru still managed to threaten the course record at today’s 46th Honolulu Marathon, clocking 2:09:01. His was the second-fastest time in the history of the race, surpassed only by compatriot Lawrence Cherono’s 2:08:27 winning time last year, still the only sub-2:09 performance in race history.  Ekiru, 26, won by nearly four minutes.

The calm conditions at the start and finish areas were not indicative of how blustery it was in the race’s middle stages in Hawaii Kai east of the finish line in Waikiki.

“Wind is beyond brutal right now,” commented Honolulu Marathon Association president Dr. Jim Barahal who was watching the race from a lead vehicle at the 25-kilometer mark.

Ekiru, and compatriot Vincent Yator, were the only athletes left in contention for the win by halfway, hitting that split in 1:05:03.  The pair battled the wind together through 25-K (1:17:28) until Ekiru decided to forge ahead alone.  He ran the 10-kilometer section from 25-K to 30-K in a swift 30:27 and built up a two and one-half minute lead.  Cherono’s record –and the $10,000 bonus for breaking it– was on his mind.

“I say, let me try my best,” Ekiru recalls thinking.  “Maybe I can run course record.”  He added: “It was not easy because when you try the course you go and struggle (against the wind).”

Coming through the residential Kahala neighborhood for the final five kilometers, Ekiru began to tire.  His form, which looked so crisp earlier, had deteriorated.  Wearing a pained expression on his face, he looked behind several times.  He said he had become dehydrated and stopped thinking about the record.

Nonetheless, Ekiru’s lead was so big that victory was assured.  He shuffled to the finish line in Kapiolani Park, and broke the tape for his first win in Honolulu, and his second marathon victory of the year (he also won the Mexico City Marathon in August).  He ran here last year in his first attempt at the race and finished fourth in 2:12:19, a result which disappointed him.

“I am very OK,” Ekiru said.  “I am happy, thank God.  You know last year I came from injury. But today, I say I try this year to win this race.  Next year, God willing, I will come back.  I will try.”

Second place went to Reuben Kerio, another Kenyan, who was in third place at halfway but was able to catch up.  He clocked 2:12:59.  Yator, who had been with Ekiru at 25-K ended up third in 2:15:31 and fourth position went to two-time USA steeplechase Olympian Donn Cabral of Hartford, Conn., who made his marathon debut in 2:19:16.  He flies back east tonight because he has an exam tomorrow morning.

“It was just fun, this was fun,” said Cabral, who is in law school at the University of Connecticut.  “The wind was rough for many miles.  When the wind was not rough, I felt the humidity pretty strong.  The course was a lot tougher than I expected.”

“I tried to push, but it was never good,” Kiplagat said, clearly exhausted.  “The time is not good.”

However, she was thankful to get the win.

“I’m happy because this is my first time to run Honolulu and I win,” she said.

The top American was Polina Carlson who lives in nearby Kaneohe.  She used today’s race as a training run for January’s Chevron Houston Marathon.

“I love the Honolulu Marathon,” Carlson said, wrapped in an American flag.  “This is one of my favorite races.  So, I always look forward to doing it.”

In all, 25,059 runners started the marathon and the companion Start to Park 10-K which shares the same starting line.  Total race finishers won’t be available until tonight after the last finisher comes across the line.  The Honolulu Marathon has an open finish line with no time limit. 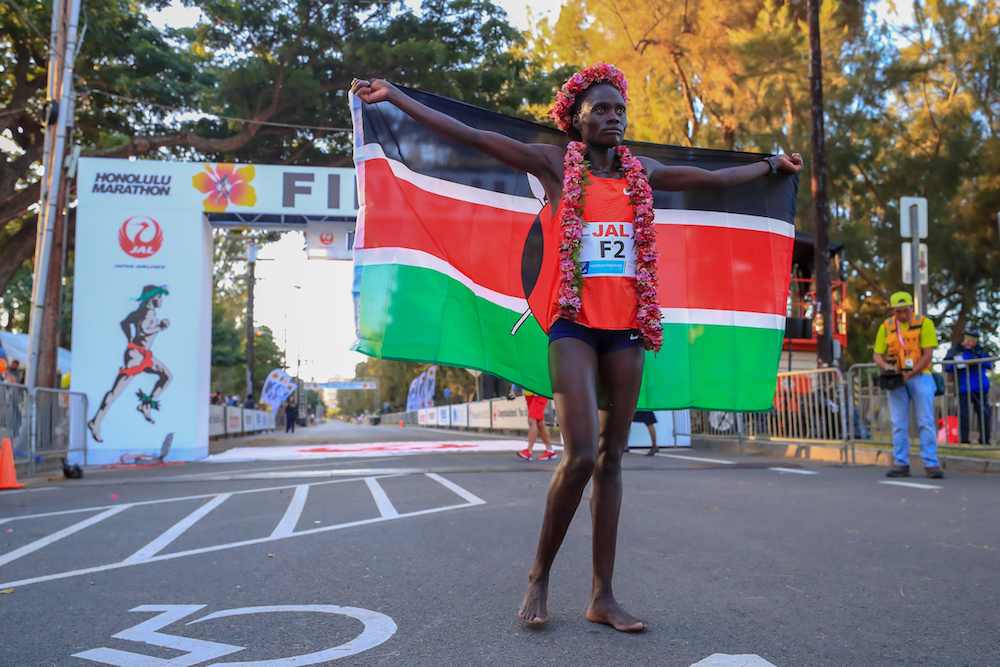 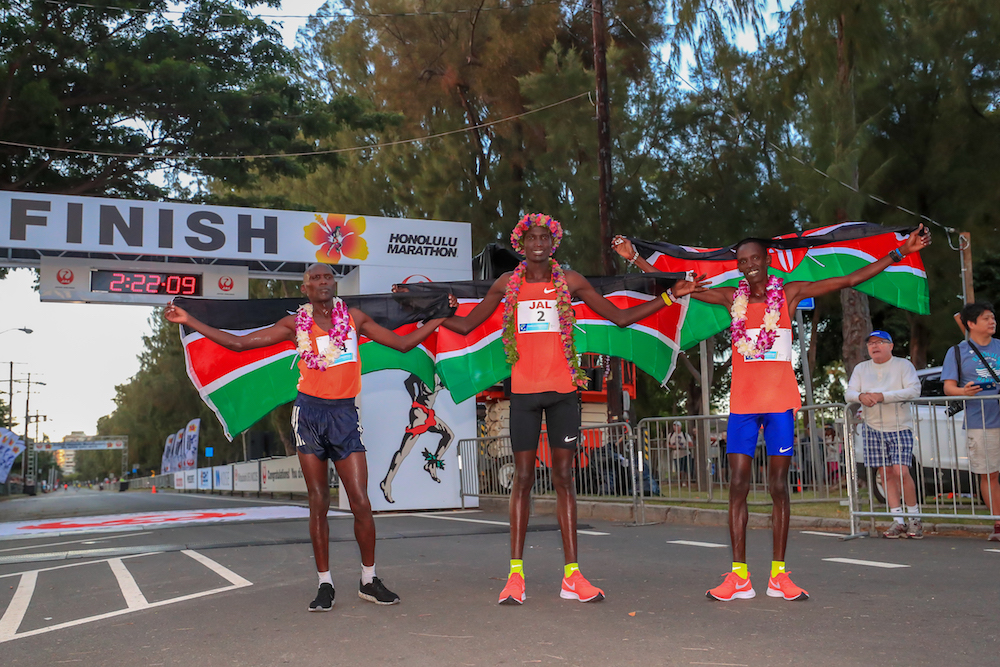 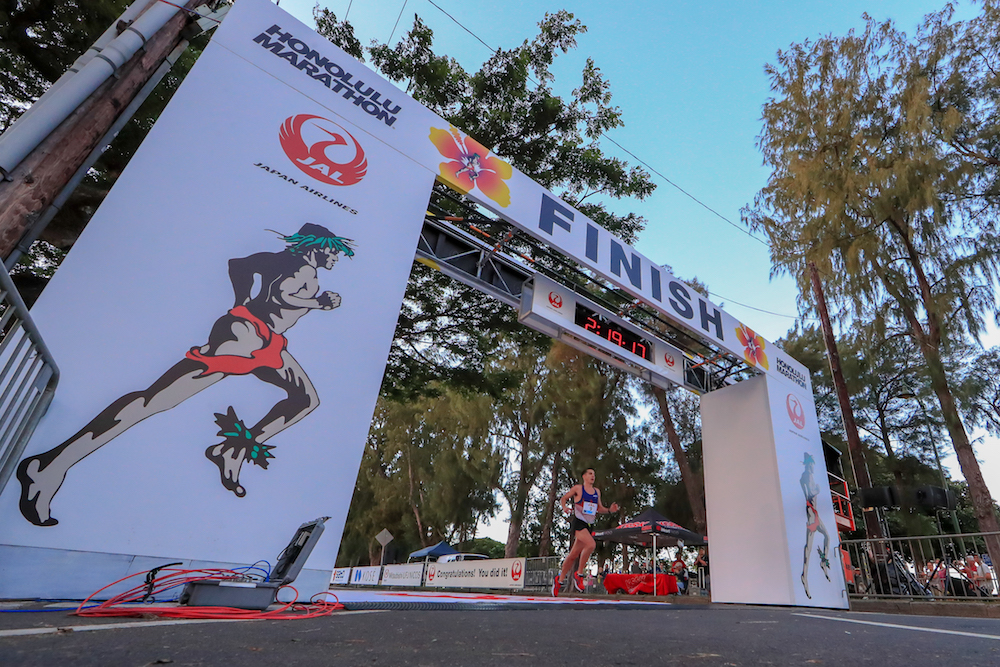