You are in: Home > News > Big Three Set to Battle for Honolulu Marathon Men’s Title

HONOLULU (08-Dec) — On Waikiki Beach this afternoon it was all fun and games at the Honolulu Marathon’s annual photo shoot for the race’s elite runners.  Athletes frolicked in the surf wearing leis and carrying beach balls and inflatable toys while a scrum of photographers clicked away.  Everyone was all smiles.

But come Sunday morning here, things will take a serious turn as the small field of Kenyan men assembled by elite athlete coordinator Jon Cross will battle for the $25,000 first prize and both time and course record bonuses which could easily double the winner’s payday.  Weather conditions are expected to be excellent by Honolulu standards with only light winds, moderate humidity and temperatures in the mid-60’s Fahrenheit (18 to 20 Celsius).

“We only get this weather for two weeks a year,” observed Honolulu Marathon Association CEO, Dr. Jim Barahal.

Kimetto, 33, is looking to end what has been a trying year on an up note.  He was supposed to race the Boston Marathon last April, but never made it to the starting line after injuring his knee in a fall.  He started the Bank of America Chicago Marathon on 8 October and was with the leaders at halfway, but he never made it to the 25-K mark.  He was seen limping off the course.

Kimetto said that his leg injury was behind him, and that he was actually very optimistic for Sunday’s race.

“For me now, it’s OK. I had the injury for three months, but now it’s OK. Training is going well, and everything is OK.” He added: “I expect to run the course record.”

Cherono’s career has definitely been on a more positive trajectory.  The 29 year-old took second at the NN Rotterdam Marathon last April in a personal best 2:06:21, then won the TCS Amsterdam Marathon on 15 October in a course record and personal best 2:05:09.  Those two performances came on the heels of his superb 2:09:39 here last year where he sliced 93 seconds of of Jimmy Muindi’s 2004 course record.

“I’m feeling great,” Cherono told Race Results Weekly today.  “To win last year, this race, and this year coming back again to defend my title, I am happy for that chance they give me to come back again. It is my great happiness to be here again.”  He added: “This one was a turning point in my life because I set a course record. That was something that I had not done before.”

Chebet, 32, who won here in 2014 and was second in both 2015 and 2016, played a big role in Cherono’s course record performance last year.  He was the only man who was able to go with Cherono in the second half of the race, and the two traded surges –including a 4:47 20th mile– before Cherono was able to escape at 36 kilometers to cross the finish line alone in Kapiolani Park.  Chebet was second in 2:10:50, also under the previous course record.

“Wilson Chebet, we have trained together and he is my best friend,” Cherono said after last year’s race. “The challenge that he had to me, I knew he was the best because he has been here before and run this marathon the last three years and knew the course.  It was a challenge for me.”

There is also a good chance that last year’s pacemaker, Festus Talam, could prevail here on Sunday.  Talam, who only turned 23 years-old on 20 October, led last year’s race through 30-K last year, running his final two 5-kilometer segments in 15:17 and 15:18, respectively, despite changing terrain.  On 8 October of this year, he ran a personal best 2:06:13 at the Eindhoven Marathon, the second sub-2:07 of his career.

“This year I run for myself,” he told Race Results Weekly.

PHOTO: (left to right) Lawrence Cherono, Dennis Kimetto and Wilson Chebet of Kenya in advance of the 2017 Honolulu Marathon on Waikiki Beach (photo by Jane Monti for Race Results Weekly) 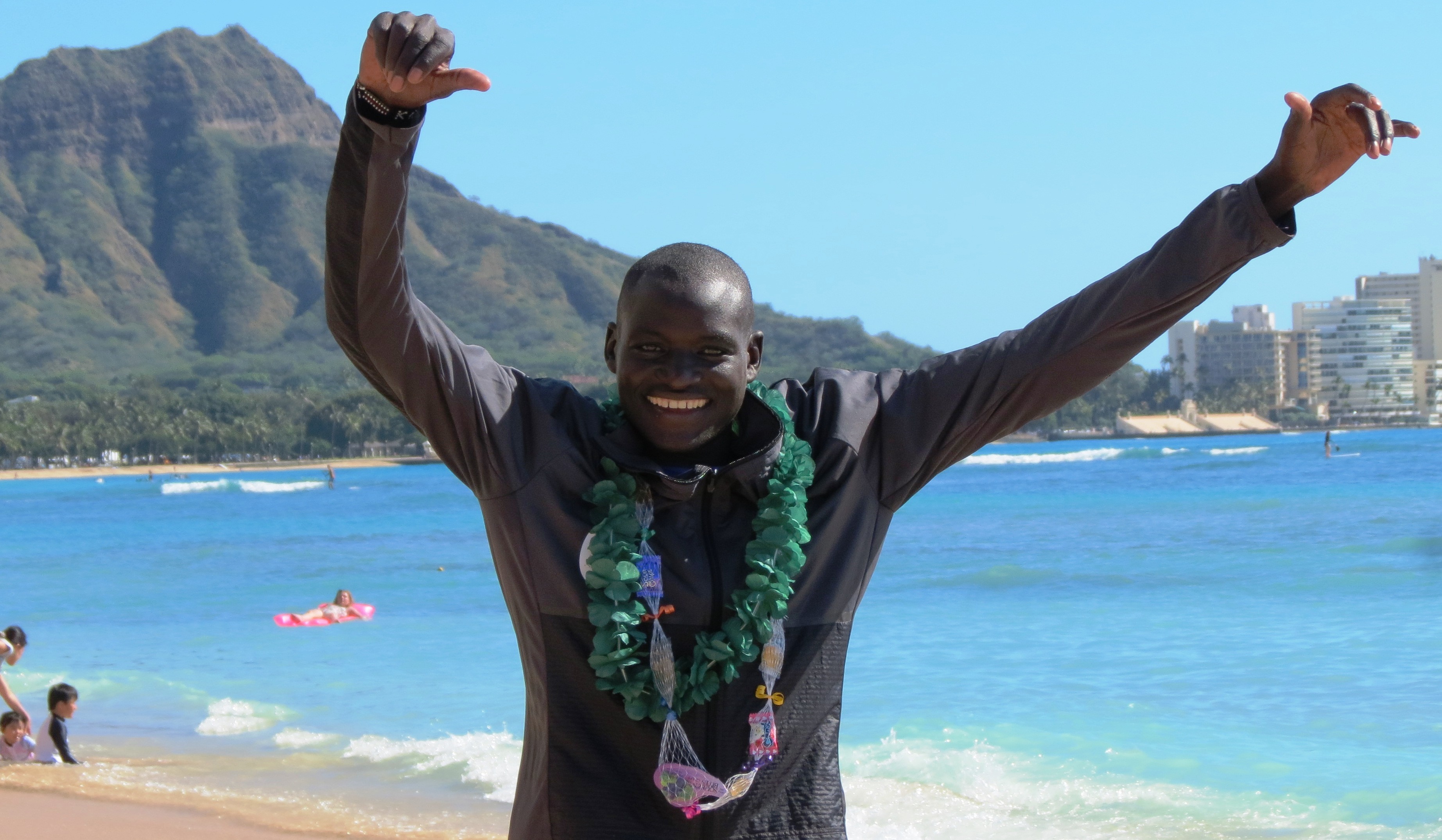