You are in: Home > News > Big surge by Kosgei clinches Women’s Title

Brigid Kosgei became just the second Kenyan woman to win the Honolulu Marathon thanks to a deciding move at 30 kilometers (18.6 miles). Up until that point, American Lindsey Scherf, a late entrant, held control of the race, pushing out front as Kosgei ran just steps off her shoulder.

Reaching halfway in a solid 1:15:15, Scherf and Kosgei proceeded to drop pre-race favorite Buzunesh Deba by 16 miles. Deba, champion of the 2014 Boston Marathon and the fastest woman in the field, was suffering in Honolulu’s soaking humidity, a far cry from the cold temperatures she’s used to training in in New York City.

Scherf, 30, hit a rough patch at 19 miles. Scherf did not take any water through 14 miles, and did not have any of her own special fluid bottles on the course like the other elites. The lack of fluids seemed to catch up to the former Harvard University star with more than 10 kilometers to go.

“I did not think she could catch me,” Kosgei told Race Results Weekly. “I knew that I would win.”

Kosgei’s margin grew to nearly three minutes by the finish, crossing the line in 2:31:11. Scherf savored the crowd’s spirit entering Kapiolani Park, giving high fives before taking runner-up honors in 2:34:05. Deba rounded out the podium in 2:35:34.

“I feel well because I was the winner of this year’s marathon,” said Kosgei. “The weather is very hot, that’s why it affected me. But at 30 kilometers I was having energy and I pushed.”

Just a week after winning the Singapore Half-Marathon, Scherf was delighted with the runner-up finish here. It was the first time an American placed in the top three here since Stephanie Rothstein Bruce was third in 2012.

“I went into it running my own race, within my own effort,” explained the fast-talking Scherf.  “I knew that was my best chance at a good time and a good finishing place, but I wasn’t anticipating second. I was thinking realistically a top five or maybe ambitiously snag third. “I’m very, very surprised and happy with my competitive place in second.”

Defending their Honolulu Marathon Wheelchair titles easily were Masazumi Soejima and Wakako Tsuchida, both of Japan. Soejima won the men’s race in 1:35:35 while Tsuchida took the women’s race in 1:50:42. 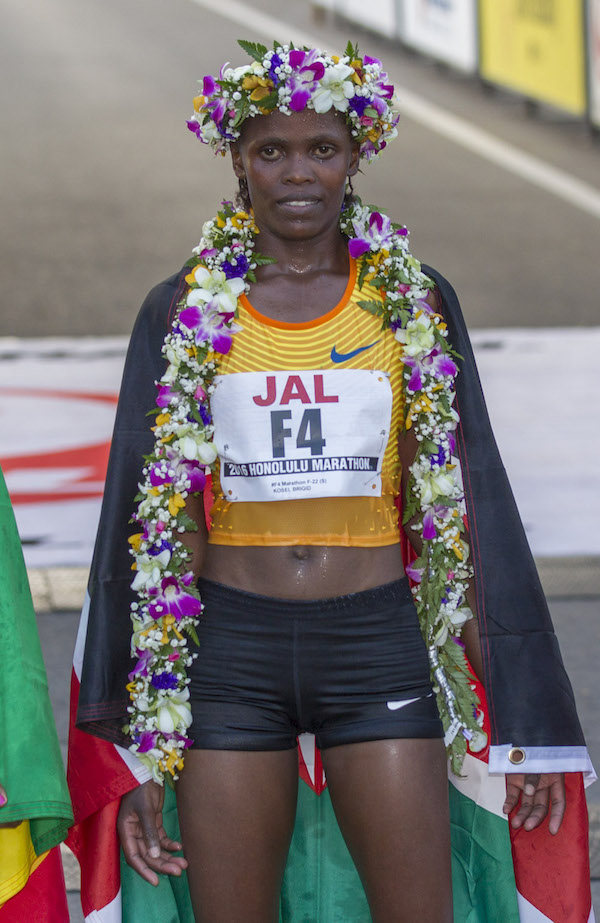 Honolulu Marathon's women's first place finisher Sunday, Dec. 11, 2016, Estimated 25,000 runners from all over the world participated in the annual race in Honolulu. 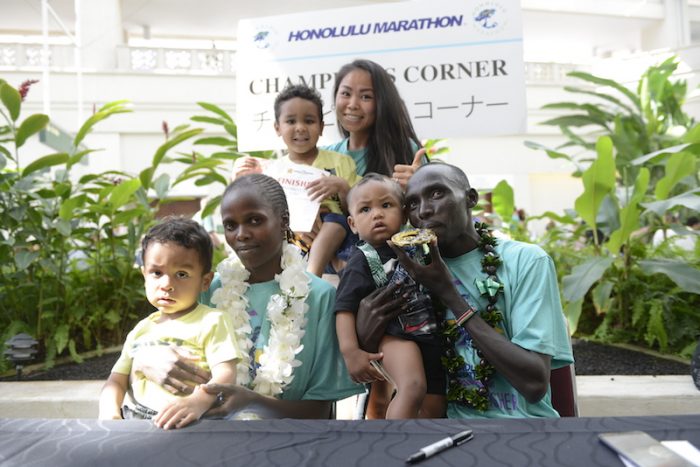 Brigid Kosgei and Lawrence Cherono sign autographs at the certificate pick up, the day after the race. 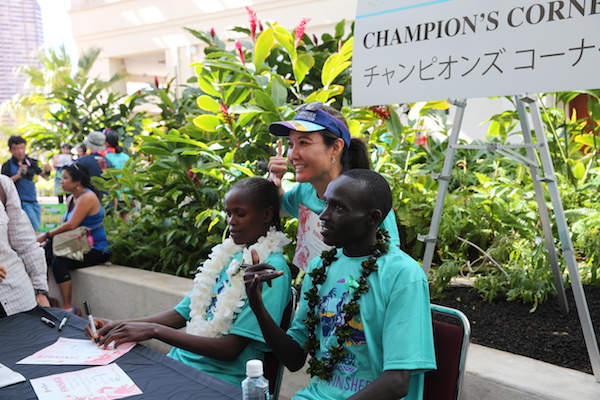