HONOLULU (12-Dec) — After a two-year hiatus, the Honolulu Marathon returned as an in-person race here today with victories going to Canada’s Lanni Marchant and Kenya’s Emmanuel Saina. In typical Hawaii weather –warm, humid, windy and sometimes rainy– both Marchant and Saina completed mostly solo runs from Ala Moana to Kapiolani Park in 2:41:25 and 2:14:32, respectively. About 9000 athletes started the marathon and companion Start to Park 10-K.

“It was exciting,” said Marchant who represented Canada in the 2016 Rio Olympics in both the 10,000m and marathon. “It was the first marathon that I won overall as a female. It’s always awesome to get the win.”

Marchant, 37, ran today’s race on a very short turnaround from the TCS New York City Marathon on November 7, where she finished 11th in 2:32:54. Joined by two men, she passed 10-K in 37:05, on about a 2:36:30 pace. But between there and the halfway point (1:19:08) she began to slow. Running alone, especially during the windy sections in the middle of the race, was difficult. The second half was both a physical and mental battle for the former Canadian record holder for the marathon.

“It was a struggle out there,” Marchant admitted. “I dehydrated quick. Those last few miles I really had to find my purpose for running. I just got myself across the finish line.”

After breaking the finish tape, Marchant had a friend remove her racing shoes because her feet were cramping so badly. She smiled for her post-race photos, and despite the pain was upbeat given the obstacles she faced over the last few years. After a significant surgery in 2018, she lived in nearby Kailua with friends as she recuperated. She was thankful for where she is today and feels a special bond with Hawaii.

“I’ve been on journey back to high-level running the last couple of years,” Marchant explained. “I had major hip surgery in 2018, and I came out here to start my running program again. My first running steps were taken here in Hawaii so it seemed like a good fit to come out here and run a marathon.”

Atsede Baysa of Ethiopia, who was expected to race against Marchant, was unable to start the race.

On the men’s side, Emmanuel Saina got a big surprise early in the race when his compatriot, Reuben Kerio, dropped out just past the 5 km point with stomach trouble. That left Saina, 29, to forge ahead on his own. He had never run so far by himself.

Saina was on a solid pace through half-way (1:05:42), but like Marchant had a rough second half. He, too, was running on a short turnaround from the NN Rotterdam Marathon on October 24, where he ran 2:05:51.

“It was very windy,” Saina said, “especially where it was raining. I was running against the wind. It was very difficult.”

When Saina came down the final finish straight he was clearly suffering. He was pitched forward and his stride was stiff. Nonetheless, he was able to raise his arms as he broke the tape and flashed a smile for the photographers. He said that he was thinking about his wife and two children back home in Kenya.

“This is the best award I can give them,” he said.

In the wheelchair competition, Tyler Byers of Greenacres, Wash., and Chelsea Stein of Tucson, Ariz., were the winners in 1:42:59 and 2:33:02, respectively.

For the Honolulu Marathon Association, the not-for-profit which organizes the race, it was thrilling to have their event back on the ground, despite a smaller field due to travel restrictions for Japanese runners who usually make up the bulk of the field. The Honolulu Marathon usually attracts 17,000 Japanese runners, but because Japanese citizens must quarantine for two weeks when returning from overseas there were fewer than 200 this year.

“I think for the community, Honolulu and Hawaii has been pretty locked down,” said Dr. Jim Barahal, a medical doctor who is the president of the Honolulu Marathon Association. “Travel has been restricted. There haven’t been any events.” He continued: “This is really the first fairly large event in Hawaii (since the start of the pandemic). We’re pretty excited that the mayor worked with us and wanted this event to happen. We’re pretty pleased and proud that we can maybe play our part in helping people resume a healthier life.” 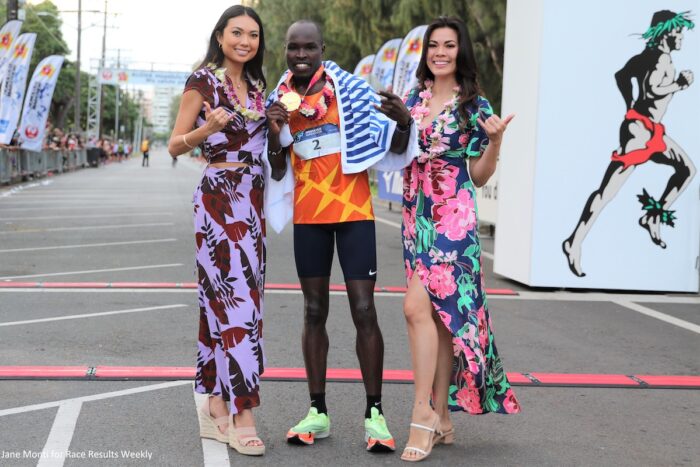 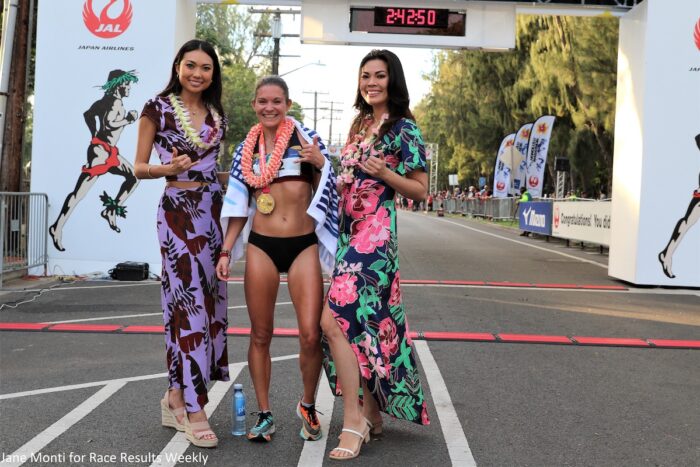