You are in: Home > News > THREE-PEAT FOR CHESEREK AT KALAKAUA MERRIE MILE

HONOLULU (07-Dec) — Blasting away at the gun and leaving nothing to chance, Kenya’s Edward Cheserek won his third consecutive Kalakaua Merrie Mile on a picture-perfect morning in Waikiki. His time of 3:53.3 was both an event record and the fastest mile ever run in Hawaii, a remarkable achievement considering that the course includes a 180-degree turn. Cheserek, who lives and trains in Flagstaff, Ariz., won $4000 in prize money.

“My main focus was just thinking about the clock,” Cheserek told Race Results Weekly. “I wasn’t worried about anybody else.”

This morning’s race used a handicap format for the elite heat. The women were given a 28-second head start, then the men set off to chase them. Prize money was paid for the top-4 places ($4000-3000-2000-1000) based on the overall finish of both genders combined.

With that format, the women couldn’t afford to race each other and had to go hard from the gun knowing that the men would soon be close behind. Elinor Purrier, Shannon Osika and Nikki Hiltz worked together from the start to make sure the pace was high.

“Honestly, I had no idea what to expect,” said Purrier who lives and trains in Boston. “I just went how I felt and it was like we all just got into a groove.”

The turnaround point is about 1000 meters into the race, and the women were still in the lead. After making the turn, Purrier said she didn’t see Cheserek coming on the other side of the roadway because he was already behind her and gaining.

“I could see Patrick Joseph across the fence as we turned around, but ‘Ches’ was already so close that I couldn’t even see him,” said Purrier.

About 150 meters into the return leg, Cheserek caught Purrier. He was impressed at how far ahead the New Balance-sponsored athlete was and how hard he had to run to reel her in.

“The lady from New Balance was ahead of me really far,” Cheserek said. “Like I’m going to get her.”

For the remainder of the race, Cheserek ran alone and went all-out. He only eased off slightly before the finish line to enjoy the cheers from the crowds which lined both sides of the course on Kalakaua Avenue. Bathed in the golden light of the just-risen sun, he raised his arms triumphantly as he finished.

“Definitely, I was like I’m going to go all-out across the line,” said Cheserek.

The battle for the three remaining prize money places was intense. With about 20 meters to go, Purrier was still in second place but four men were right behind her: Patrick Joseph, Craig Huffer of Australia, Brimin Kiprono of Kenya and Eric Avila. The race uses a narrow finish line, so the men started to converge on the much smaller Purrier who was in the center of the course and had the best line to the finish.

“I didn’t even hear them, honestly, before the finish line,” said Purrier who was only passed by Kiprono who got second in 3:56.3. “We were like colliding.”

Purrier ran 4:25.0, which put her just seven tenths of a second behind Kiprono with the handicap adjustment. Joseph just edged Huffer for the fourth spot, 3:57.0 to 3:57.1. Osika was the second woman home in 4:25.7 followed by Rachel Schneider in 4:31.2. Seven men broke four minutes including Johnny Gregorek who celebrated his 28th birthday today by running 3:59.9.

For Cheserek, winning for the third time here was something special.

“It’s amazing, you know, to come here and win again,” said Cheserek his neon yellow Skechers Performance singlet still soaked with sweat. “I’m looking for more winning, maybe in the next couple of years. I still want to run the road mile.”

About 2200 runners finished the open and elite races here this morning, a 26% increase over last year. Dr. Jim Barahal, president of the Honolulu Marathon Association, was so pleased with the race that he decided on the spot to invest more money in the elite section of the race for 2020.

“I think we’ll increase the prize money for next year and make it more interesting,” he told the crowd assembled on Waikiki Beach for the awards ceremony. 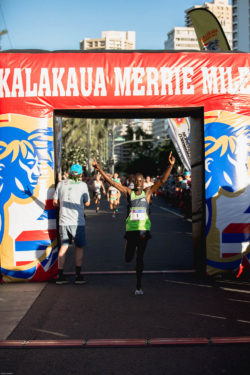